Live, play, vacation, whatever...West Lake is the reason for the season.  Much history surrounds West Lake, 1 of 3 blue water lakes in the world.  With a maximum depth of an astoinishing 136 feet, coverage of over 3800 acres, and average depth of 39 feet, one will rarely find a more inviting and cleaner lake.  If you are lucky enough to traverse the waters in March and early April, you would likely be the only boat on the lake providing for awesome views of the lake bottom.  In the Winter, you will find that the lake freezes, allowing fishermen to bring their shacks and also allowing the possbility of the University of Okoboji Winter Games.  West Lake has fantastic fishing ranging from small pan fish like crappie and blue gill to large game fish such as the muskie.  Land prices on West Lake were at a high in the mid 2000's prior to the economic collapse, and they have slowly crepped up to a range of $10000-$17000 a linear foot.  This is fairly subjective depending on location, approach, depth of lot etc.  West Lake is also known for a number of families with long and rich heritages having passed their cottage down from generation to generation.  Come ski, swim, parasail, fish, or just lay an anchor.  You are sure to enjoy.

The following is from Wikipedia:

West Okoboji Lake (sometimes known as West Lake Okoboji) is a natural body of water, approximately 3,847 acres (15.57 km2) in area, in Dickinson County in northwest Iowa in the United States. It is part of the chain of lakes known as the Iowa Great Lakes. The area was long inhabited by the Santee or Dakota Sioux. The Dakota-language name for the lake was Minnetonka, meaning "great waters".

The cities of Arnolds Park, Okoboji, West Okoboji, and Wahpeton sit on its shore. Okoboji was derived from the Dakota name for the lake, and Wahpeton was the name of one of the major historic Sioux bands in the nineteenth century. Today the Sisseton-Wahpeton Sioux are a federally recognized tribe. 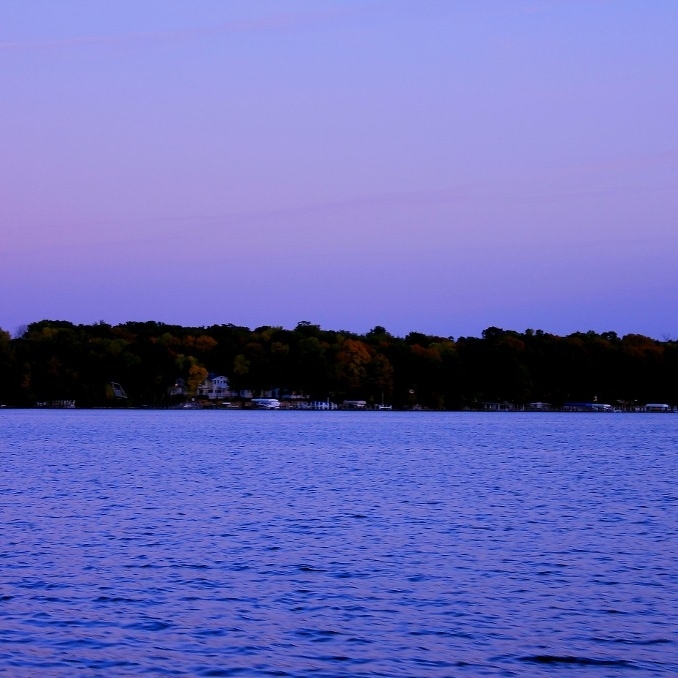 Referred to locally as the lake turning over the thermocline is a feature of lakes with deep water. The water on the top of the lake changes temperature much more variably during the year. On West Lake, it can reach as much as 75 degrees in July while the water below, greater than 35 or 40 feet deep is relatively stable around 45 degrees. In the fall and early winter, the top strata of the lake will cool to below 45 degrees, and then because it becomes denser, it will "sink" below the lower strata, thus, displacing it and making the lake "turn-over". In the deepest part of West Lake (near the 136ft mark), no light is availble, and hence little life is known whether fish or plant. Typically questions are raised as to why the surface water gets dirty for a short period of time in the fall, this this is the standard answer. 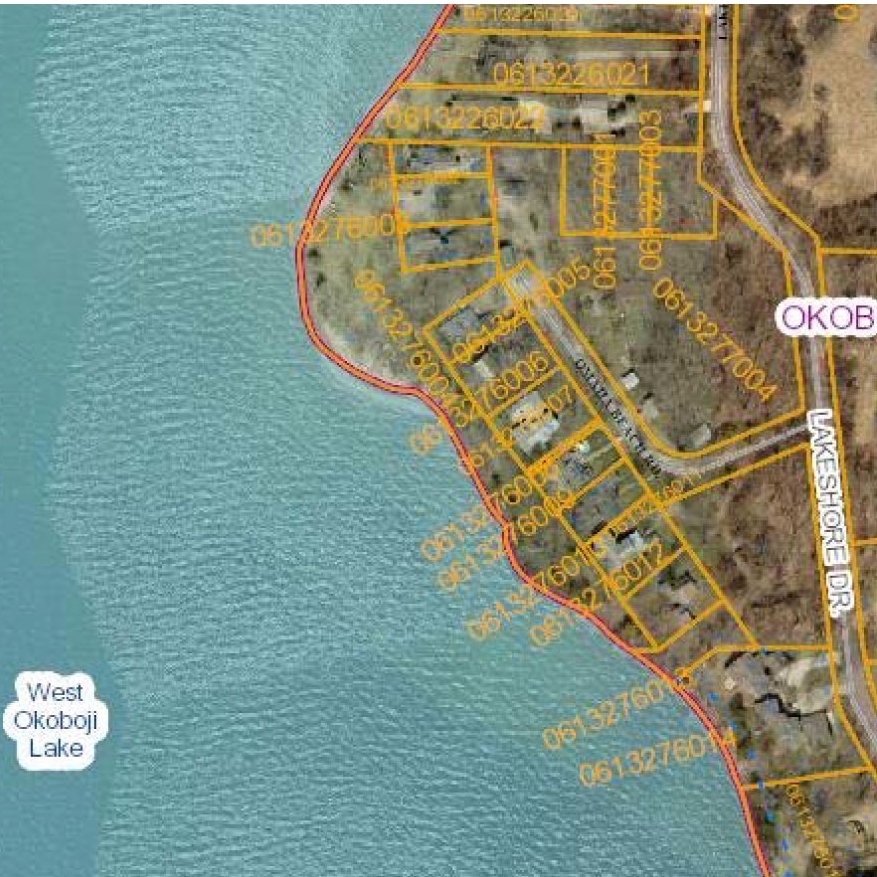 Omaha Beach is on the north end of Echo Bay, extending out into Omaha Point. Known for its secluded private access from Lakeshore Drive, Omaha Beach properties are some of the most sought after on West Lake, easily fetching over $15000 per linear foot of lakeshore. 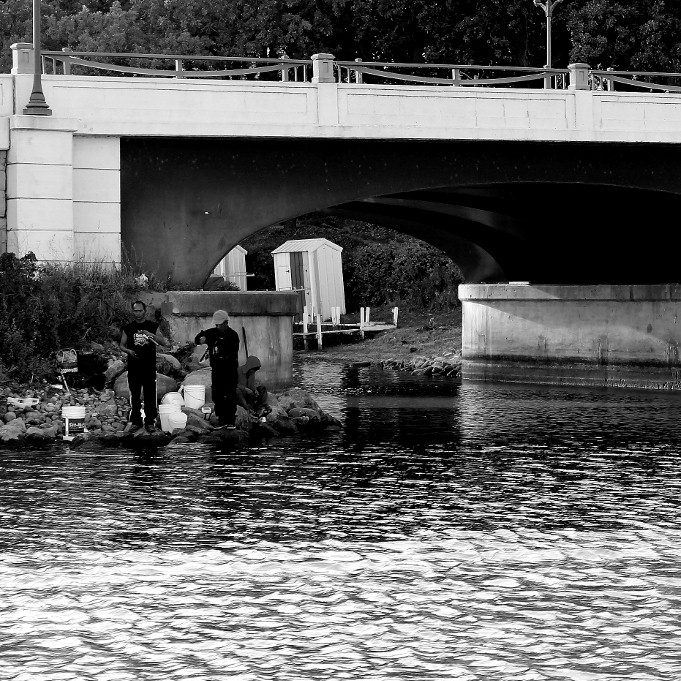 "The Bridge" has been referred to by the Wharf Bridge, the Kentucky Fried Chicken Bridge, the bridge connecting East and West, among other names. In the good old days, this was actually a draw bridge converted to the current permanent structure. In the 90's when the 3 lane was installed, there was talk about removing the bridge and making some drastic changes. All in all, the base of the bridge remained, and the upper structure was improved. I remember as a kid jumping off the bridge, and fishing on and under the bridge. In fact, an unforgettable memory I have is when I was fishing with my cousin and I casted out trying to reach the opposite corner of the bridge with my lure. In mid air, a pigeon flew and the timing was so great that my line wrapped around the pigeon, and the pigeon went into the water. I reeled it up and had caught a pigeon. My cousin then decided to hold this pigeon inside the front of his coat. We went to show people at Okoboji Boats what we had caught. When we got there, he opened his jacket, and the pigeon had pooped all over his white shirt. 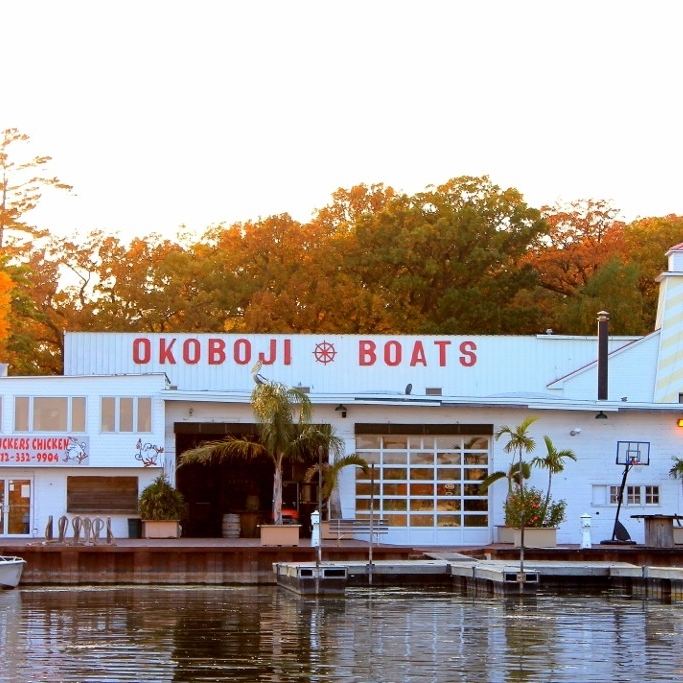 Okoboji Boat Works is home to "The Fish Shack" and "The Inconvenience Store". Formerly a marina of thriving boat sales since 1890, OBW now offers up many different rentals, a 24 hour gas dock, excursion boats, and more. I remember the days as a child of fishing for crappie and blue gill here and along the docks of Smith's Bay. Though the scenery has changed, the outstanding fishing has not. 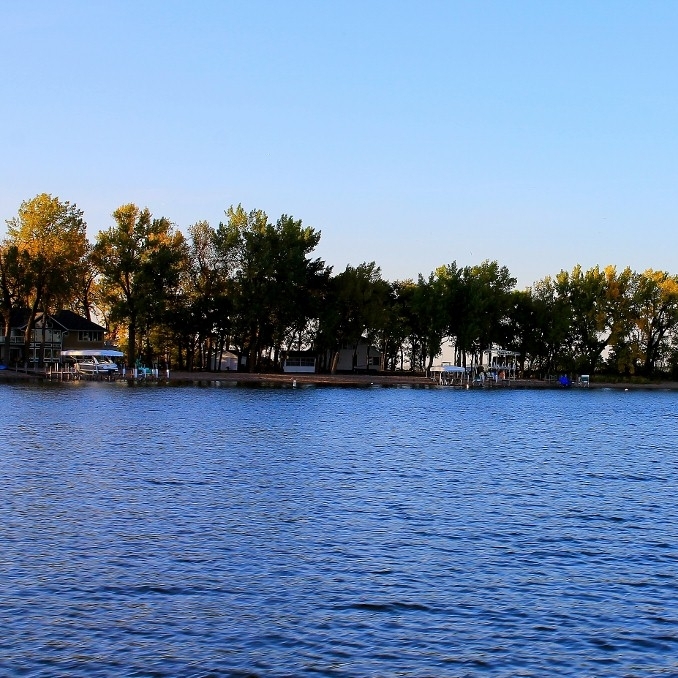 The West Lake "Tie Up"

For most leisure boaters in the Iowa Great Lakes, there are 2 main hot spots to go throw an anchor, sit back, and just relax. Sometimes this will result in numerous boats tying up to one another (you may not even know your neighbor), and sometimes it results in a little more privacy where you can chill just by yourself. Every weekend, boaters make the trek across the deepest parts of West Lake to either Gull Point (North AND South side) and Miller's Bay. Thought there are many other great areas to throw an anchor, relax, and swim, these are the two hot spots. If you aren't sure where to go on a Saturday afternoon or wonder where your friends might be, these two spots would be a good start. 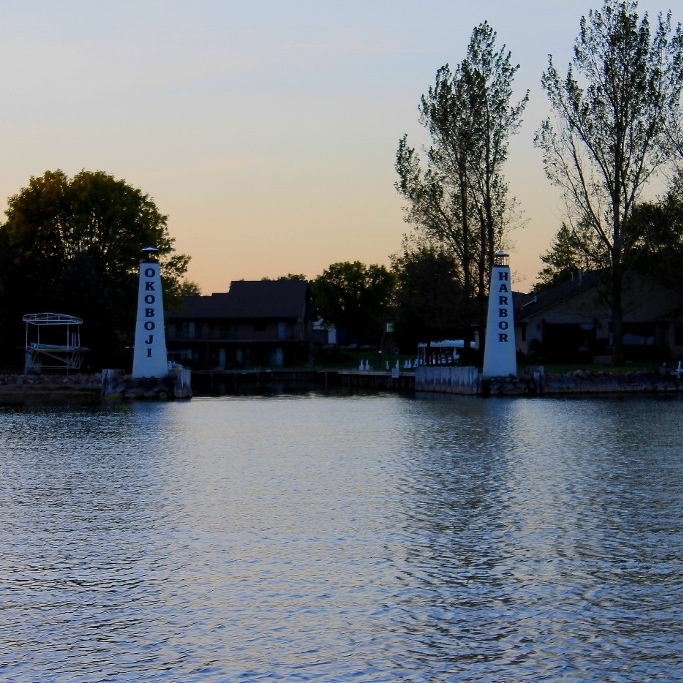 The harbor is a man made inlet located on the north end of West Lake. A board walk surrounds the harbor and this is one of the most tranquil parts of the lake. Homeowners in the harbor have a more affordable way to have access to West Lake, and still get to enjoy the clean waters West Lake has to offer. Homes in the Harbor typically range from about $350k to as much as $700k. 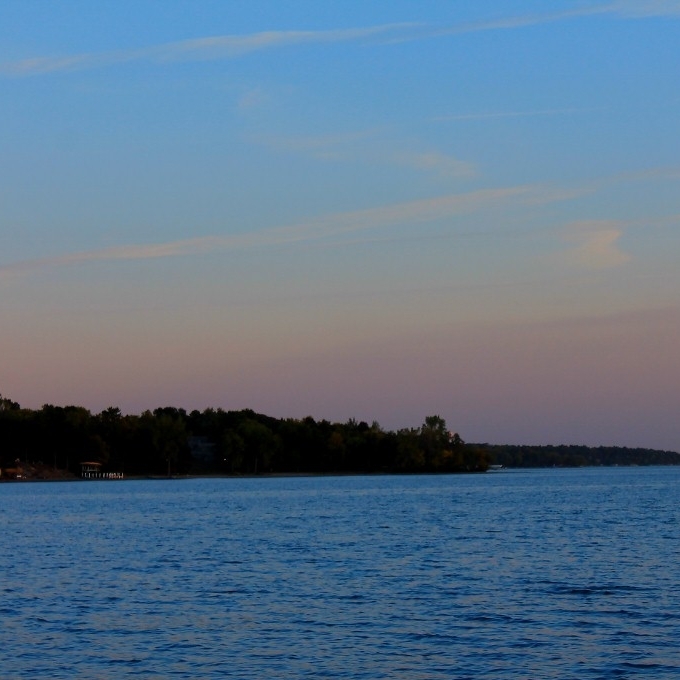 Pike's Point is located at 15973 213th Ave, Spirit Lake, IA on beautiful West Lake Okoboji. It is one of the largest parks in the Iowa Great Lakes, and provides for all kinds of activities including fishing, swimming, bird watching etc. This park also has a rest room, and a beach. If coming by boat, one wants to be careful as the point extends far into the lake, and there is a warning buoy roughly 300 feet from the point of shore. In 2010, many trees here were uprooted because of some severe straight line winds during the storm that reaked havoc through the Iowa Great Lakes. 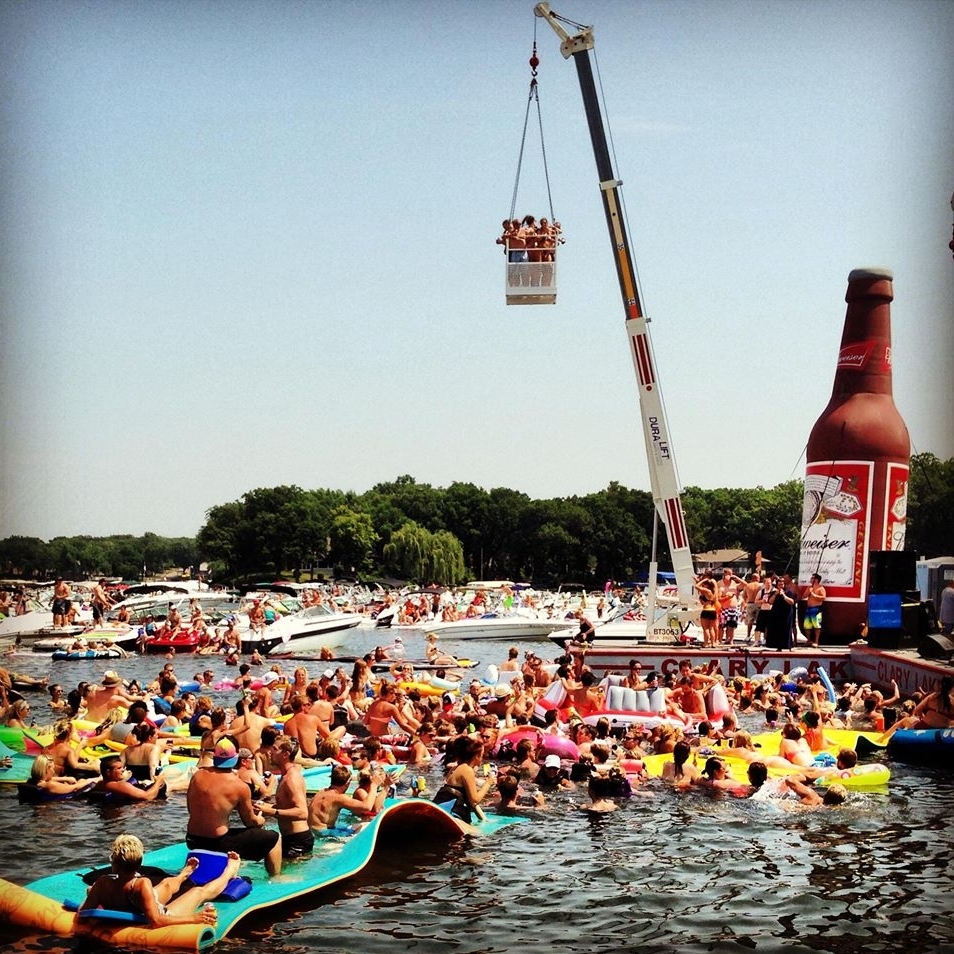 Miller's Bay, on the west side of West Lake is a popular spot for boaters in the summer to just go chill out, throw an anchor, and relax. On the weekends, this bay is filled with boats tied up to each other offering families the opportunity to have the kids swim, or you might find a bunch of party animals chugging beers and enjoying the summer sun. Either way, everyone is having a great time, and so if you are out and about, just know that Millers Bay is where boaters go in the summer to be where the party is at.

Terrace Park is located in Brown's Bay on West Lake, Okoboji. It is one of the largest public beaches on West Lake and has entertained beach goers for many years. Next to Terrace Park is Boys Town out of Omaha, Nebraska. I remember as a kid spending entire days at terrace park, either riding bicycle or taking a moped (yes a moped) down to meet with friends and playing king on the dock. In 2010, the morning after "the storm", Terrace Park was carnage. Boat were stacked on top of each other. Trees were uprooted, and hoists were tossed around. Boats and other water craft were found in Terrace Park that belonged to owners on the North end of West Lake. 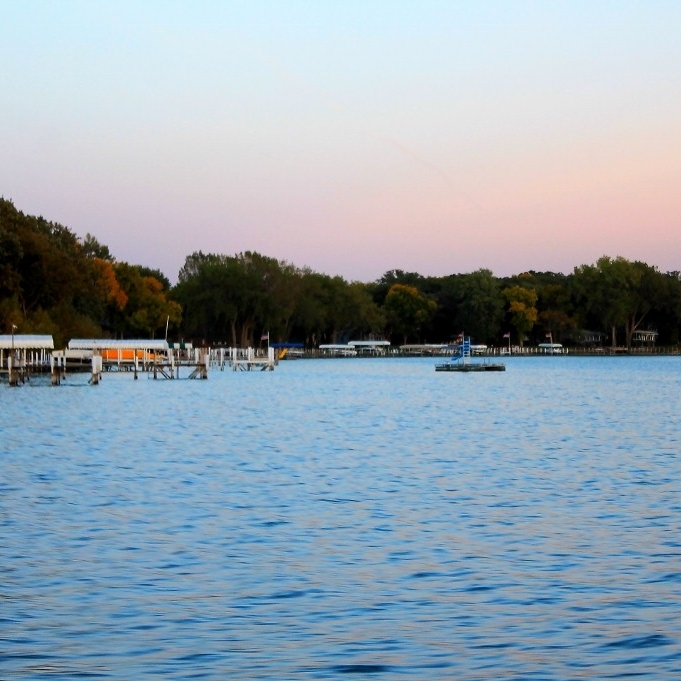 Haywards Bay on West Lake Okoboji boasts low approaches and one of the few areas on West Lake to offer sand beaches. Renowned for the "bay of the flags", you will know you are in Haywards bay because of the all the American flags on the end of the docks. Fishing is great in Haywards Bay and the sunsets are one in a million. To get to Haywards Bay by car, one would drive the east side of the lake on Lakeshore Dr.

Have you been dreaming of a little cabin on the lake- how about 2?! These two homes in Triboji have recently been refreshed and are ready for you to enjoy! Both feature a living/dining area along with 2 bedrooms and a bathroom. The property...

Own this West Lake Okoboji gem! This 2 bedroom, 2 bathroom home is located in PMC right on West Lake Okoboji. Enjoy this quiet community with all the benefits of West Lake, sand beach, dock, boat space, and club house, in an association that...

The newsletter is sent periodically and will update you on the latest real estate news and offers.

Bojihomes.com and RE/MAX Lakes Realty provides these covenants/bylaws/horizontal propoerty regime declarations as a convenience, and in no way guarantees the accuracy of these documents, and in no way represents that these documents are up to date and/or legally binding. It is the responsibility of any potential buyer, seller, investor, and/or real estate agent to contact any association contact and/or the Dickinson County recorder's office in order to satisfy themselves as to the very latest available documents.

These documents are the property of Bojihomes.com and RE/MAX Lakes Realty. The downloading of these documents for use by any other Real Estate Agency is strictly prohibited.